Our support your success!

THE COMPANY IS ESTABLISHED BY LEIF HAUGLAND

Leif Haugland has many years of experience from weapon technical service in the Armed Forces, both in Norway and in international operations. At the end of the 90s he had to make the choice to continue his career in the Armed Forces or to try as a civilian.

Options fell on the civil sector as a sales engineer in a company that supplied goods and services to the Armed Forces. This company unfortunately fell into bankruptcy in the fall of 1998 and he had to again to make a choice.

Together with his wife Line Haugland using all their savings company Obsima was establised. Focusing on defence needs for shooting training acting as an agent.

US FATS Inc signs an agreement with the Armed Forces to deliver handgun simulators as well as deliveries of technical training equipment to Rena's firing range. Obsima is agent for FATS and also develops and deliver bullet-traps and ricochet protection.

The development took place in collaboration with the Armed Forces, FFI and Rana Gruber Service AS.

As a result of the development of bullet-traps along with Rana Gruber AS, Obsima becomes part of the supply chain for the delivery of bulletproof, removable shoot walls to shoot house at Rena. The walls manufactured by Rana Gruber AS.

Obsima needs a wider product range to achieve a better cash flow. Obsima makes contact with, among others, Invisio Communition AS (radio garnish) and Lambrecht GmbH (meteorology) and receives exclusive sales agreements in Norway. These partnerships exist to this day where Invisio, among other things, has become a larger part of the company's turnover.

Asbjørn Slettmyr is employed by the company as a result of the company's investment in radio communication. Asbjørn has technological expertise in electronics and audio acoustics from companies such as Norsk Data, Simonsen, Tandberg Television and Kongsberg Defense Communication.

THE COMPANY IS SPLIT IN TWO

In connection with Vinghøg AS's investment in CLS (Outsourced Maintenance Agreements), the Defence section of Obsima is purchased by Vinghøg AS and renamed Vinghøg Obsima AS. Leif Haugland joins the team down to Nøtterøy and continues as general manager.

Remaining parts of old Obsima, both products and employees, remain in Gjerdrum and are continued by Line Haugland under the name Obsima AS. Vinghøg Obsima signed operation and maintenance agreement for shooting and training facilities for the special forces. An important milestone that will help shape the company to what it is today.

Due to changes in Vinghøg AS, Leif Haugland repurchases Vinghøg Obsima AS and operations are moved back to Gjerdrum. The two "Obsima companies " are merged and the company Obsima Technology is established.

Obsima Technology signs an agreement with Polytronic AG on the operation and maintenance of the target material in Regionfelt Eastern Norway. Michael Kropf is headhunted from Polytronic in Switzerland moving to Norway and Rena with his family and becomes our responsible operating technician in the Region of Eastern Norway.

The board decides to aim to consolidate shooting training market in Norway. The company hires a sales and marketing manager and establishes a project and sales team. The goal is to become Norway's largest supplier of products and services for shooting and training facilities in Norway.

Most special units in the Armed Forces and the Police choose Invisio as the standard communication accessory for their radio systems.

Obsima Technology starts work on sales in Sweden and establishes communication and sales channels to the Swedish Defence and Police.

This year proved to be a very exciting and action-packed year. The company was celebrating its 20th anniversary with several fun and exciting activities for employees and their families.

At the beginning of 2018, the company signed an agreement with Fidelity Technologies Corporation Inc on the provision of operating and maintenance services on the FAC simulator in Rena camp.

Obsima Technology has had activities in Rena camp for almost 20 years and in 2018 we had 6 employees working from the Rena office. The company has for a long time been engaged in the idea of ​​our own office at Rena and in May we opened a office with storage and workshop. The 6 employees belonging to the Rena office have now finally got a joint office.

The company now counts 11 heads and it has been an exciting and fun journey so far and we are looking forward to the future!

The board decides to pursue to build up our electronics portfolio. The company hires a sales and product manager. The goal is to be a complete supplier to dismounted soldier (tactical electronics).

Our Support – Your Success 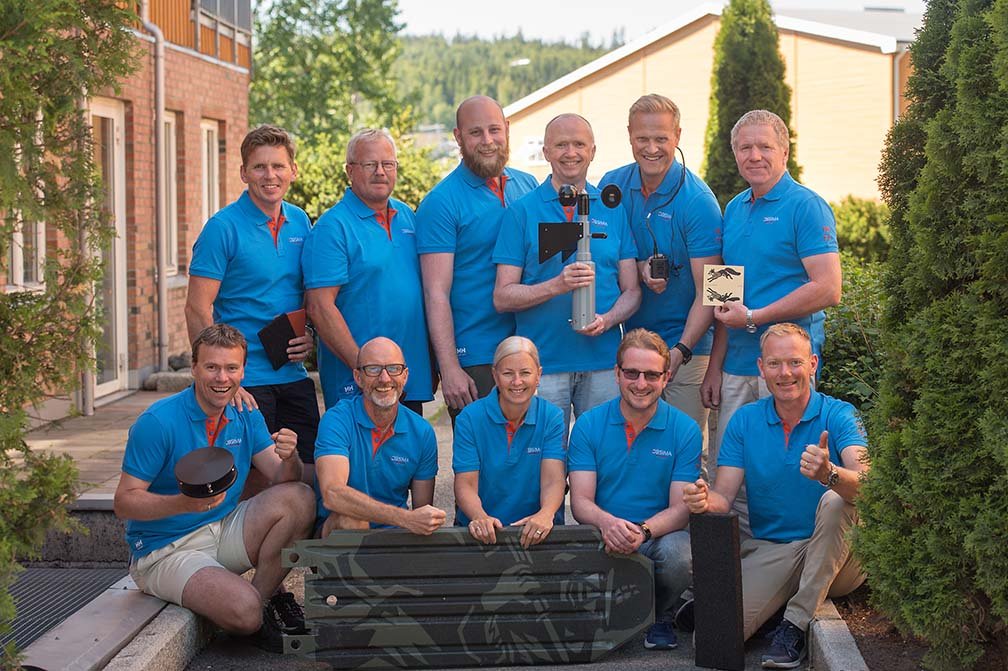